Euro and American Truck Simulator are two premiere sim games worth playing with head tracking. SCS Software made both ETS2 and ATS games compatible with head tracking so gamers can experience close to real-life trucking in PC game form.

As with most PC simulation game titles, truck simulator immersion and realism are core to the experience. Beyond a gaming experience similar to virtual reality, as an ETS2 gamer, you likely want to try as many truck simulator hardware and software apps as possible to bring your virtual trucking sim rig to the next level.

Why Use Head Tracking In Truck Simulator Games?

Head tracking is the technology that will help you achieve this realism. A 6DOF PC gaming head tracker makes it possible for you to use your head as a dedicated camera controller in simulator truck games. See it for yourself. Watch the head movements in action provided by the 아이웨어 빔 앱.

Players from across the ETS2 community currently use head trackers with great success on their delivery route. If you’ve been curious about this augmented reality technology and whether it’s right for you, we’ve assembled the top five reasons why you should drive in ETS2 or ATS with head tracking.

The SCS Software game developers aim to give you as close an experience of driving a big vehicle as possible. Just load your Euro or American Truck Simulator Map to choose one of the seven DLC base map expansion packs, and you’re on your way.

On top of playing a truck simulator game with that level of realism, you already add truck simulator hardware such as steering wheels to immerse yourself into the experience further. Six degrees of freedom 헤드 트래킹 takes that to the next level. With an app that enables you to track your head’s movements like Eyeware Beam or Smoothtrack ($10+), you can freely look around your cab.

Everything you need to place your eyeballs at, from your instruments and mirrors to the windows that gaze upon the scenery around you, can be put into view with a simple turn of your head. It’s one of the critical features ETS2 players like Truckers MP look for in AR headsets, but without the bulky truck simulator hardware.

Even better, you don’t have to miss out on that level of immersion because of motion sickness, as one writer described in an American Truck Simulator blog post. With head tracking, you can move your view as much as you like while your Renault T truck is cruising down the road to the black sea without feeling queasy. Even better, you can achieve experience for less than you may think.

Head tracking alleviates all of that by making the act of handling your heavy virtual vehicle accurate yet straightforward in simulation games. For instance, when you’re trying to park at your depot in ETS2, you need to do a lot of mirror checks to make sure you don’t back the rig into a wall. Using a head tracker app makes that more manageable because you only need to direct your head towards your mirrors for your view to shift simultaneously. What’s more, your head’s movement depends on where your eyes fall, so your in-game camera immediately points where you need it with precision. 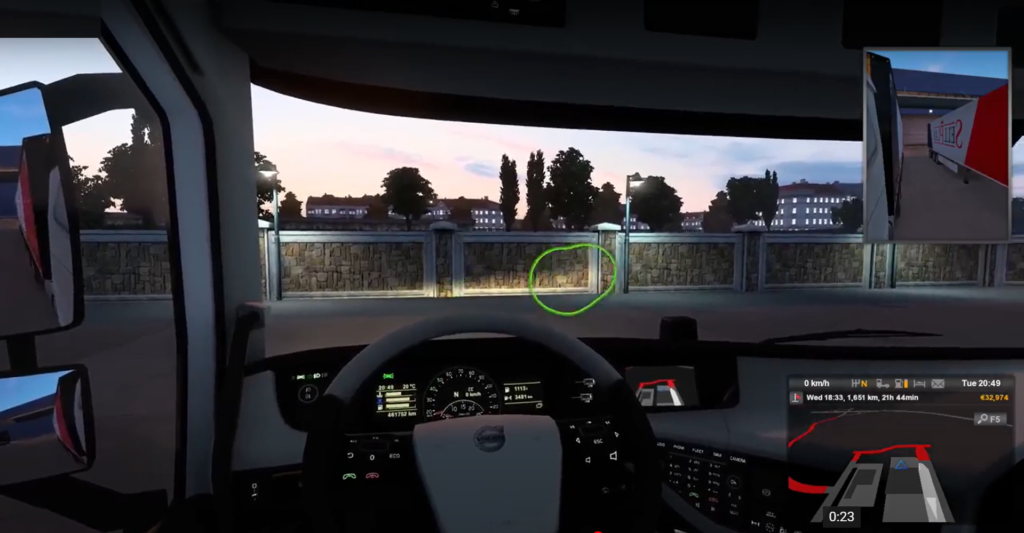 We mentioned earlier how elaborate steering wheels have become. All of those various buttons and knobs are typically programmable so that you can customize your experience and tailor the controller to your needs as you ride through Italia or Iberia.

This level of customization can be compelling when you load up your steam account with life simulation games from SCS Software like Euro Truck Simulator 2 or the American Truck Simulator counterpart. Typically, you want to dedicate some of those extra controls, such as thumbsticks, to your camera controls. By mapping your view controls to a head tracker app, you are instantly given different buttons to do as you please.

On top of that, you don’t need to concern yourself with using your thumbs to control your view. Any aspect of your cab, instruments, and the road ahead and around you is instantly accessible with a turn of your head. Whatever camera knob your controller has can be dedicated to something else, such as gear shifting. Even if your steering wheel is basic without added frills, 6DoF head tracking enables you to customize your experience without the added cost of buying extras.

Euro Truck Simulator 2 on PC wants you to feel like you’re driving an actual vehicle. It emulates the feel of cruising down vast highways, curvy mountain paths, and jam-packed urban streets. Part of the experience of making this feel realistic is to simulate actual turns.

When we humans steer real cars and trucks, there’s not a more natural movement than using our heads to get a view of what we’re doing. Head tracking brings that natural feel to every turn you perform in ETS2 while avoiding the bulky equipment that would make the delivery experience less authentic.

Especially when you’re a beginner to computer-simulated driving, turning is a tricky affair. The lack of the natural weight of a truck around you with your cargo sometimes blocking the view, plus the disconnect of being sat at your desk or couch means that you need to rely on your vision and the force feedback of your controller to turn correctly.

We covered how these apps can easily make the experience more immersive and flexible, so what’s left is enhancing it with the natural reactions our bodies have when we turn. Once you’re hitting that hairpin on a mountain pass in ETS2, you’ll instinctively want to move your head. Head tracking is one tip that takes that reaction and translates it into camera movement. Those movements respond to the direction you’re looking at. Because this happens naturally, it only takes a few moments to get used to it.

Head Tracking Grows on You Quickly

Speaking of getting used to new things, you and other ETS2 players might have concerns about whether transitioning to tracking head movements is easy. The overwhelming consensus from the Reddit ETS2 community seems to be “yes.”

Head tracking aims to leverage your natural inclination to look at things with your eyes and head. Once you have your phone or tablet and app set up, it should be a simple case of trying it out in-game until you get the hang of it. People in the community feel it merely takes a few seconds to a few minutes to get accustomed to using your natural head movements to direct your camera.

A common theme among the questions being asked or written about in some of the best simulation games like Euro Truck Simulator 2 guides about head tracking seems to be the degree to which your head needs to move versus losing sight of the screen. The good news is that you don’t need to make big sweeping motions to register an input. With some experimentation with sensitivity settings and head tracking guides, you can make it so that the registered inputs move as much as you feel comfortable.

Head tracking was made for game simulators in a variety of contexts. Therefore, it stands to reason that it offers a fair few benefits for ETS2 or the ATS game, which many hours with the game’s never-ending play style. Whether it’s an option for you will depend on several factors.

You need to ask yourself how much immersion and realism you want in your setup, for starters. One of the strengths of head trackers is that they add that layer of natural control that enhances the experience without the need for bulky equipment.

You also might want to consider whether the flexibility this tracking offers will fit your current sim setup. These apps are a massive boon for users of no-frills controllers because it frees up controls that are otherwise needed for looking around the cab and road.

The lack of expensive truck simulator hardware makes it easier to get your NPC drivers to use it on their deliveries. Even if you own a premium wheel, there’s likely always some other feature you’d somewhat control with your thumbs instead of your camera.

Regardless of your reasons for head tracking, it’s become more accessible than ever to add one to your sim racing PC or driving rig. Thanks to computer vision algorithms and machine perception AI technology that is not dependent on ARKit, software-based trackers like our 아이웨어 빔 generate an accurate head pose and eye tracking signal comparable to expensive proprietary devices from Tobii or TrackIR. This is what enables a gamer to turn their Face ID supported iPhone or iPad, with a built-in TrueDepth camera, into a reliable, precise, multi-purpose head and eye tracking device for 190+ OpenTrack enabled PC games.

Do you want to connect with the truck simulator community?

Do you want to share ATS tips or compare ATS vs ETS2? Visit these truck simulator communities or the Eyeware Beam Discord 자세한 내용은.